Dearth – what is that?

Home/Bee nutrition, Educational, Health and Welfare/Dearth – what is that?
Previous Next

Dearth – what is that?

Dearth.  It’s a beekeeping term that defines the periods of beekeeping that nectar (food for honey bees, bumbles or hummingbirds) isn’t available to them in the environment.  How and why does a dearth happen?    To get to the beginning of the story, it’s important to understand plants and how they work – they don’t produce nectar in flowers to help the plant, they put nectar in flowers to attract pollinators.  It’s to ensure that the pollen gets from one part of the flower to the other to produce seed – plant sex if you will!! Lol   So if there is a dry spell, the plant will conserve water to ensure its own survival first, meaning no nectar in the flowers.  So just because you see pretty flowers doesn’t mean that they’re producing nectar for the pollinators.

The situation in our area now is drought – we have had a deficit of rainfall in both June and July to the tune of about 1.5” of rain.  That’s a basically a drought for the Pacific NW.  With the wildfires all over the west coast, it’s pretty evident that the moisture level is down generally this year.  About the only thing blooming are the dandelions and clover along the roadways in any volume – and the maintenance crews are busy mowing those down to the gravel, so no help there!! 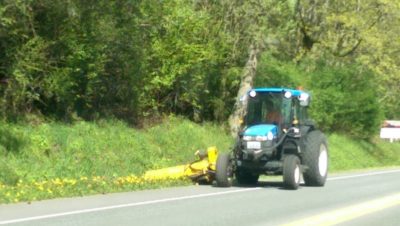 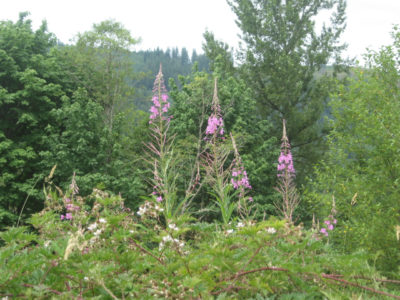 The blackberry and fireweed – two best honeys in the world!!

A dearth can also occur when the flowers aren’t blooming at all – mostly happens in the fall, but due to local environmental conditions (temps, water, humidity, etc.), the plants can have altered bloom cycles from year to year causing artificial gaps in the bloom timeline.  Plants will bloom out of sync and may bloom on top of each other one year and not in a succession which would provide a constant source of nectar.  We had this happen as well this year, where I noticed that the fireweed started blooming early – on top of the blackberry.  OBTW, both of these are considered noxious weeds by the government in WA state and are being eradicated as fast as possible – another blow to the pollinators.  I’m not sure if the bees like the fireweed or the blackberry nectar better so we’ll see what we get when we extract honey, IF we extract honey.

Another issue with managed farm animals is that they have to meet their needs before they can meet the farmer’s needs.  That means if there’s not enough honey in the boxes before the winter season hits to feed the bees for 6 months – well then there’s none for the farmer to take.  Makes for a very sad harvest season…..and a long spell until the next paycheck.   Remember farmers get their paychecks once a year usually – at harvest.  If harvest doesn’t happen they have to have the reserves necessary to make the bills until the next harvest comes.  …and if two bad years run back to back, that’s usually a death sentence for the farms (and that’s someone who’s worked more hours per week than any corporate employee).  Working in adverse weather conditions that a normal person would only have to walk through to get from their car to their house – these folks spend their life in it. 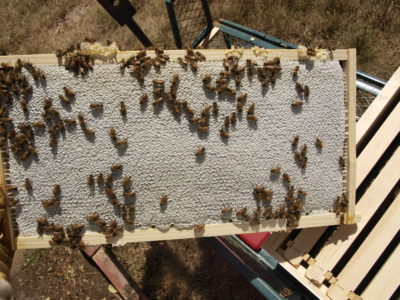 Supplementing the honey bees with as close a product as possible to nectar helps the bees to survive and make the new bees required to overwinter.  We can help them by doing something similar to what folks do for the hummingbirds – give them access to sugar water.  The problem with hummingbirds and honey bees is that at this time of year the hummingbird feeders are filled with a sugar syrup that is a 1:1 ratio of water to sugar.  The honey bees right now need a thicker version (1:2) in order to not have to work so hard to dehydrate it and make it into comb resource for feeding on over the winter.  It’s not bad for them, just not optimal – and a lot of people don’t like a horde of bees hanging out at their bird feeder.  I guess you’re either a bee person or a bird person!! lol 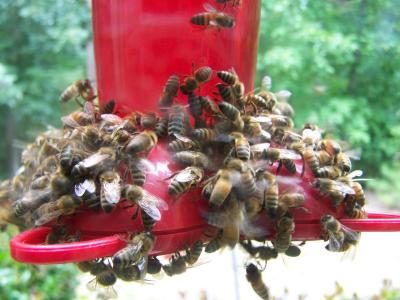 They do take over when they’re hungry!!

So when you see the bees on flowers, stop for a moment and check out how much time they spend on each flower – the faster they move along, the less they’re getting out of the flower.  If it’s August you can be sure that they’re moving along because there’s nothing there to get.  Happy bee watching!! 🙂